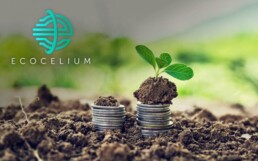 EcoCelium is changing the way we look at finance today. The EcoCelium platform is a place where you can feel safe and secure to keep your assets, while also having the opportunity to earn a great return and grow your assets for many years to come. Please see the full announcement HERE. 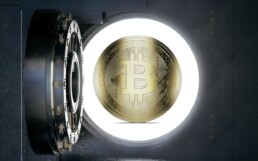 The Ormeus Reserve Vault is currently in development. The ORV has been a support mechanism, built like our gold reserve, for our own Ecosystem. This next stage of the ORV will allow us to attach and create interoperability with all aspects of the business including our fully decentralized autonomous organization (DAO). Please see the full announcement HERE. 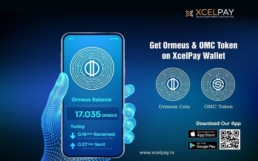 XcelTrip is proud to announce its partnership with Ormeus Ecosystem – a globally accepted crypto token that is redefining the business-backed blockchain smart economy and the integration of Ormeus Cash (OMC) on XcelPay Wallet.

Please read THIS for the full article. 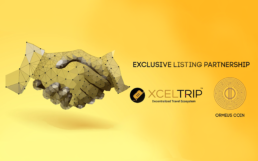 We’re listing our tokens on the Xceltrip platform.

Xceltrip and Xcelpay will allow our community to have access to over 400+ airlines and over 1.5 Million hotels around the world.

It allows Ormeus Coin and ECO to be utilized for travel around the world.

You will be able to book hotels and flights on Xceltrip website from 15 June 2020. 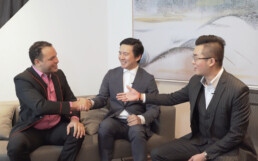 Ormeus Ecosystem is excited to announce our largest strategic alliance of our business career, with HyperCapital. 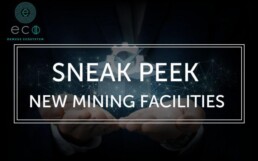 We are happy to announce our mining partners are prepared for the delivery of our mining equipment.

Please WATCH HERE the first part of a series of videos to update the community on our mining facilities progress. 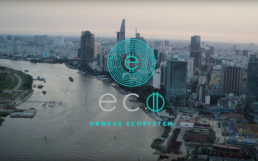 The Cusp of Revolution - Driving Businesses Digital Economy with the Ormeus Ecosystem!

Bring on the digital economy!

Like the robust economic growth in Vietnam whose policies and support of international business interconnection has created a boom, businesses who take part in the Ormeus Ecosystem will benefit from the world’s first fully-interconnected asset-backed blockchain technology complete with the financial DNA of governance, automatic KYC, and full anonymity via cross-chain and side-chain business to business communication.

Catch up with John Barksdale in Saigon as he gives us an update on exciting new developments for Ormeus ECO, Ormeus Cash and new augmented-reality OMC GO localized offline decentralized exchange. 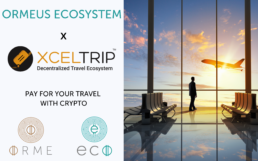 ORME & ECO Are Soon To Be Accepted at XcelTrip, Stayed Tuned!

Pay for your travel with crypto!

Ormeus Ecosystem and XcelTrip are pleased to announce that ECO & ORME will soon be available to pay for services on the XcelTrip website.

You can check out their page HERE.

XcelTrip have also been mentioned on FORBES as a top 6 startup flourishing outside the U.S.

This is an exciting development for Ormeus Ecosystem in its vision to create real-world cryptocurrencies that can be used to pay for goods and services.

Features include –
* Over 1.5 million hotels and 400 airlines listed on their site and counting;
* Great rates when paying with cryptocurrency;
* XcelTrip mobile App so you can book on the go;
Supported languages – English, Chinese & Korean.

They are making it easy for you to use your crypto to book your next hotel or flight with them. Plus there are some potentially great savings by using crypto, compared to paying with fiat on the traditional big-name travel websites.

Check them out today and get ready to use ECO & ORME for your travel very soon!! 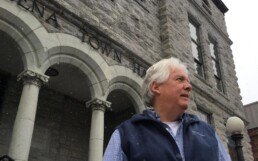 Massena, N.Y., perched on the northernmost border of New York state, is the archetype of the company town that has lost its companies.

Downtown there’s a pillared town hall and a Main Street lined with stately old buildings, along with an empty union hall, a couple of banks and restaurants, and a bunch of vacant storefronts — echoes of the town’s more prosperous past.

Aluminum giant Alcoa drove the town’s growth in the 1900s, attracted by the plentiful electricity generated by a nearby hydropower dam on the St. Lawrence River. But Alcoa has downsized greatly over the last decade. General Motors and Reynolds Metal plants closed, too. Massena has hemorrhaged hundreds of jobs.

That’s why back in January, Massena’s Town Supervisor Steven O’Shaughnessy was over the moon when – rather suddenly – companies that do something called “Bitcoin mining” came knocking. “They need lots of power, and they need to be able to count on it,” O’Shaughnessy says. “And we can provide that.”

The firms promised millions of dollars in investment and hundreds of jobs.

A quick primer on “Bitcoin mining”: Bitcoin is the best known of the digital or crypto-currencies – which operate completely independently of banks. Instead, they rely on powerful computers around the world to verify every transaction that uses a digital coin. People operating those computers earn new coins for doing that verification work. That’s called mining.

So companies eager to get into the cryptocurrency game have been setting up huge warehouses full of computers all around the world to mine digital coins. Cool climates are best; the computers generate a lot of heat. But more than that, mining servers gobble up vast amounts of electricity.

According to the Digiconomist blog that follows cryptocurrencies, all the Bitcoin mining computers worldwide consume more power collectively than the entire nation of Czech Republic. And as more mining companies seek their digital fortunes, that energy consumption is only increasing.

That quest for cheap power – remember the hydropower plant on the St. Lawrence that fueled Alcoa? – is why a Hong Kong-based company called Digital Skynet Limited came to Massena and set up hundreds of computers in an old factory on the outskirts of town.

Inside a Bitcoin mine

Inside the converted factory, spokesperson Tina Barksdale, wearing a comfortable blue cardigan and slacks, points to five shelves stacked with humming, shoebox-sized computers. “Those are the miners, and as you can hear, they make a lot of noise,” she shouts above the din of large cooling fans.

Barksdale says Digital Skynet employs 20 people here now. But she imagines something much bigger – many more computers, and also the seeds of an innovation hub for the technology behind cryptocurrency, known as blockchain. She envisions a transformation for the town of Massena, “from being just Massena, N.Y, to being a cryptocurrency ‘Silicon Valley’, a place where people in cryptocurrency come,” she says.

Barksdale says there could be hundreds of new technology jobs – and the support services that go with them.

“But of course,” she cautions, “it all depends on the power.”

A gold rush for digital coins

When the value of a traded Bitcoin soared to almost $20,000 late last year, a Bitcoin mining rush hit lots of places with cheap power, from Louisiana to Washington State.

But the job benefits were limited; it only takes so many employees to keep an eye on a bunch of computers. And in some places, the power-hungry miners started driving up electric rates for everybody else. Near Massena, the city of Plattsburgh, N.Y. put a moratorium on new mines because of rising electric bills.

So local leaders, like New York State Senator Joe Griffo, who represents Massena, began to ask, will cryptocurrency mining really create enough jobs to justify using all that electricity? And will those jobs last? “I would not dismiss [the industry] out of hand, but I think you need to look at things realistically,” Griffo says. “Where’s Bitcoin going to go over time?”

Digital currency values have been all over the place. Bitcoin itself has steadily dropped for most of this year. So the big question is: if the price keeps dropping, will the miners stick around?

Lex Sokolin isn’t so sure. Sokolin calls himself a “financial futurist.” He studies digital currencies and the blockchain digital bookkeeping technology they rely on for Autonomous Research in London, and he believes cryptocurrency has a promising future. But he thinks it’s inevitable that developers will come up with a more energy-efficient way to mine them.

If that prediction is accurate, towns like Massena would lose their advantage.

Digital Skynet’s Tina Barksdale says that very uncertainty is why Massena should embrace Bitcoin mining now – to establish its position in the fast-moving digital currency economy. 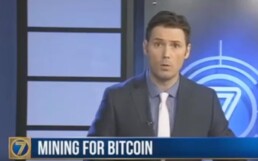 A Look Inside A Cryptocurrency Mine

Hundreds of computers run night and day. Each one is basically a little supercomputer. They work on solving the complex equations that cough up cryptocurrencies like Bitcoin.

It’s happening right now in a warehouse in the Massena Industrial Park.

“Right now, Massena has the capacity to be the Silicon Valley for cryptocurrency,” said Tina Barksdale, Skynet Digital spokesperson.

More than a dozen people work at Skynet Digital. Basically it’s all about monitoring the stacks of computers. Any problem occurs, it has to be fixed. Cooling is also a huge job. The cold climate helps. The mining is being done for Ormeus Coin.

“I think what most people in the local community should understand is that this is the way the future of money going,” said Tina Barksdale.

Skynet Digital is not the only cryptocurrency miner in Massena. Coinmint has leased the former Alcoa East smelter. Blockchain Industries wants to buy town land to build on. Local officials are cautious.

“It’s a learning curve and we are learning, but we are finding out about it. And we want to make sure it’s here to stay. And we certainly hope it will,” said Steven O’Shaughnessy, Massena town supervisor.

The profitability of cryptocurrency miners depends on the cost of electricity. Some have asked the New York Power Authority for discounts.

“It’s basically a gold rush. The gold that is here is the hydro-dam. It’s the power and the cheap electricity that’s here,” said Tina Barksdale.

Skynet Digital is small but wants to grow bigger. Elijah Barksdale is managing it. He, six brothers, and his sister are all working for the company. They were raised in Richville.

“We’re from upstate New York and we understand the job disparities of this area and we wanted to be able to bring something back to the community,” said Tina Barksdale.

Skynet Digital is training a people for that something bigger. It mines cryptocurrencies for Ormeus Coin, which is making a play to become one of the world’s top 10 cryptocurrency miners.